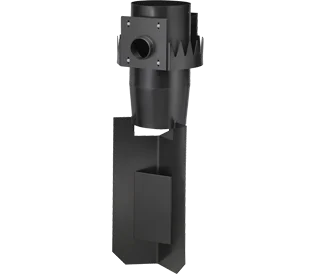 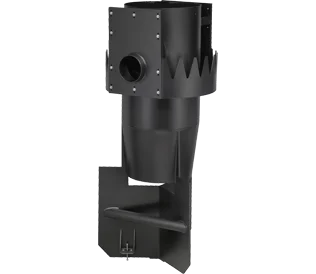 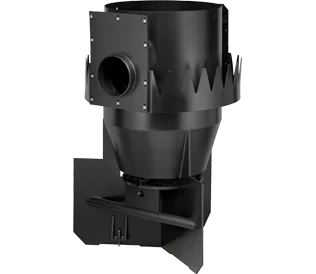 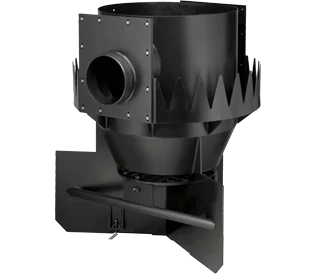 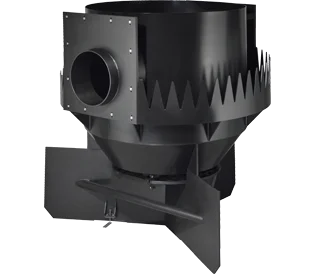 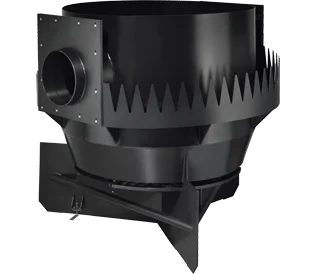 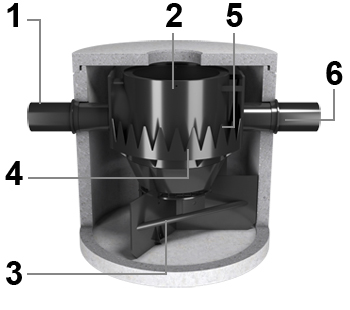 The sedimentation plant unerringly removes the filterable substances (TSS) from the stormwater runoff. In this way, it protects water bodies and infiltration systems.

First, the water is introduced tangentially into the sedimentation plant in the middle of the system. Sedimentation of solids now takes place through the so-called teacup effect. The solids sink into the sludge trap at the bottom, which is hydraulically separated from the treatment chamber by a grate and flow breaker so that remobilization of settled particles does not occur during heavy rainfall.

In the outer ring of the sedimentation plant, the water flows evenly upwards. A weir ensures that there are no short-circuit flows in the plant and that the flow is as homogeneous as possible.

The water then flows through the weir into the drain. Light substances such as oils or pollen are effectively retained, as they cannot pass under the separator wall. The sedimentation system has no height offset between inlet and outlet. The system cannot block. The system can be used on all surfaces, from roofs to traffic areas and industrial sites. The cleaning capacity is designed in such a way that the requirements of DWA M 153 and A 102 are reliably met.

As with filter systems, the number of systems on the market is increasing. While 21 filter systems have received general building authority approval (abZ) from the German Institute for Building Technology (DIBt) in recent years, there is no abZ for sedimentation systems. This currently applies exclusively to the treatment of stormwater runoff containing mineral oil from traffic areas for subsequent infiltration [1]. Sedimentation plants are mainly used prior to discharge into surface waters. Even if they are used upstream of infiltration systems, they cannot obtain an abZ because they do not retain dissolved heavy metals, which is a basic requirement of the DIBt's Building and Testing Principles (BPG).

They are usually equipped with a bypass for heavy rain, which is also not tolerated by the BPG. There is no uniform nationwide testing procedure analogous to that for filter systems. This makes it difficult for agencies, planners, and operators to evaluate and compare the performance of sedimentation plants.

These contain the majority of water pollutants. These are mainly heavy metals such as copper, zinc, cadmium, lead, chromium, the particulate-bound petroleum hydrocarbons (PCOs), polycyclic aromatic hydrocarbons (PAHs) and organic compounds [3]. Therefore, they are of particular importance for water pollution control.

The process of settling (sedimentation) in sedimentation plants can be calculated using Stoke's equation for the sinking velocity of spherical bodies.

The basic requirement for using the equation is a Reynolds number less than 1 (laminar flow). The sinking velocity is the vertical velocity at which a particle settles within a fluid medium. It depends on the density ρp of the particle, the density ρf of the fluid, the gravitational acceleration g, the diameter or equivalent diameter d of the particle, and the viscosity of the fluid.

The simplest form of decentralized sedimentation plants are round or square shaft structures made of concrete, plastic, or other materials that have an inlet and an outlet.

For many of these plants a high efficiency has to be doubted, because the conditions for sedimentation are not optimal (e.g. no laminar, uniform flow). Additional components such as calmed inlets in the inflow area, immersion pipes at the outflow or even central pipes for water guidance are intended to improve the sedimentation efficiency of the plants and in some cases can also ensure light sediment retention. From the point of view of laminar uniform flow, linear settling systems such as horizontal or ascending pipe strings with large diameters are more suitable. However, the performance here also depends to a large extent on the design, e.g. the way of inflow and outflows, and is difficult to calculate. 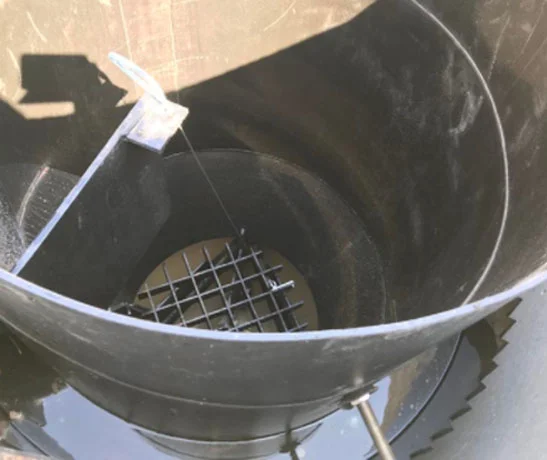 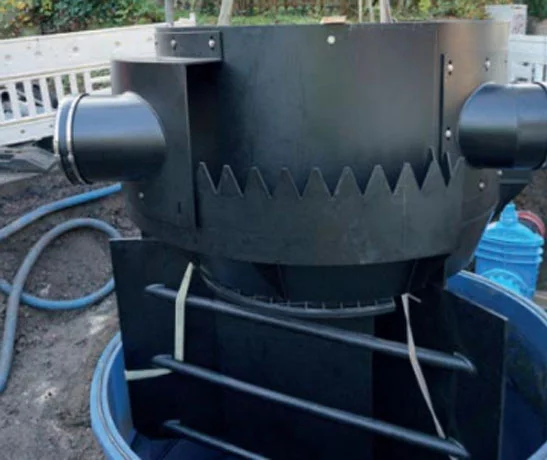 We make planning
as easy as possible for you.